Preston Taylor was born on November 7, 1949, in Shreveport, Louisiana to two enslaved parents. Never the idle man, Taylor enlisted as a drummer boy for the Union Army Company G, One Hundred and Sixteenth of the United States Colored infantry in 1864 during the Civil War. During his term in the war, he was notably at the siege of Richmond, Petersburg, and the surrender of Lee. Following the war, Taylor traveled north, preaching along the way, and eventually settled at Mount Sterling, Kentucky, where he served as a minister until 1885. Of his ministry work in Mount Sterling, it was said that he built “the largest congregation in the state among those of his faith” and attributed to him the building of “finest brick building as a place for the worship of God in the state” (“Big Brother”). The ministry work garnered Taylor a substantial amount of notoriety which led him to being one of the few African Americans to secure a building contract during Reconstruction. This project allowed him to build several sections of the Big Sandy Railway from Mount Sterling, Kentucky to Richmond, Virginia. From 1876 to 1884, Taylor served as the editor of “Our Colored Brethren,” a department in notable Reformist Issac Errett’s newspaper, the Christian Standard.

After finding success in Kentucky, Taylor moved to Nashville, Tennessee in 1885.  Over the years he would pastor a church, build Greenwood Cemetery, and establish Taylor and Co. Funeral Company. From November 1900 to April 1902, Taylor was a general agent for the Colored American Magazine. For the magazine and the Colored Co-operative Publishing Company, Taylor was noted as a “enthusiastic supporter” and helped to “push” the success of the magazine and company lending assistance looking over their business methods (Elliott 74). In 1905 Taylor expanded his ownership of the land that surrounded the Greenwood Cemetery, increasing his holdings by thirty-seven and a half acres. He used this expanded land to create the Greenwood Recreational Park for Negroes. At the park, he hosted the annual Tennessee Colored fair, bringing in upwards of 14,000 attendees at a time. In 1909, Taylor led the push for the state to establish Tennessee State Agricultural and Industrial State Normal College: now known as the HBCU Tennessee State University in Nashville. He was also one of three original founders of Citizens’ Bank. 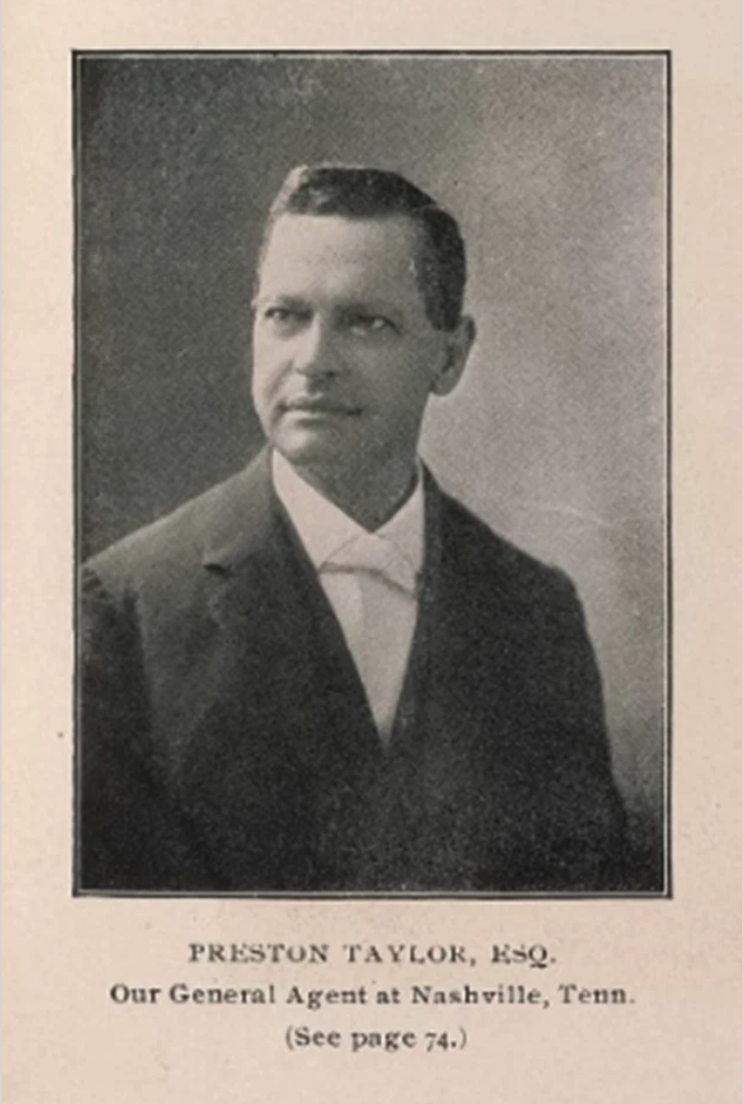 Preston Taylor as pictured in the Colored American Magazine in 1901. 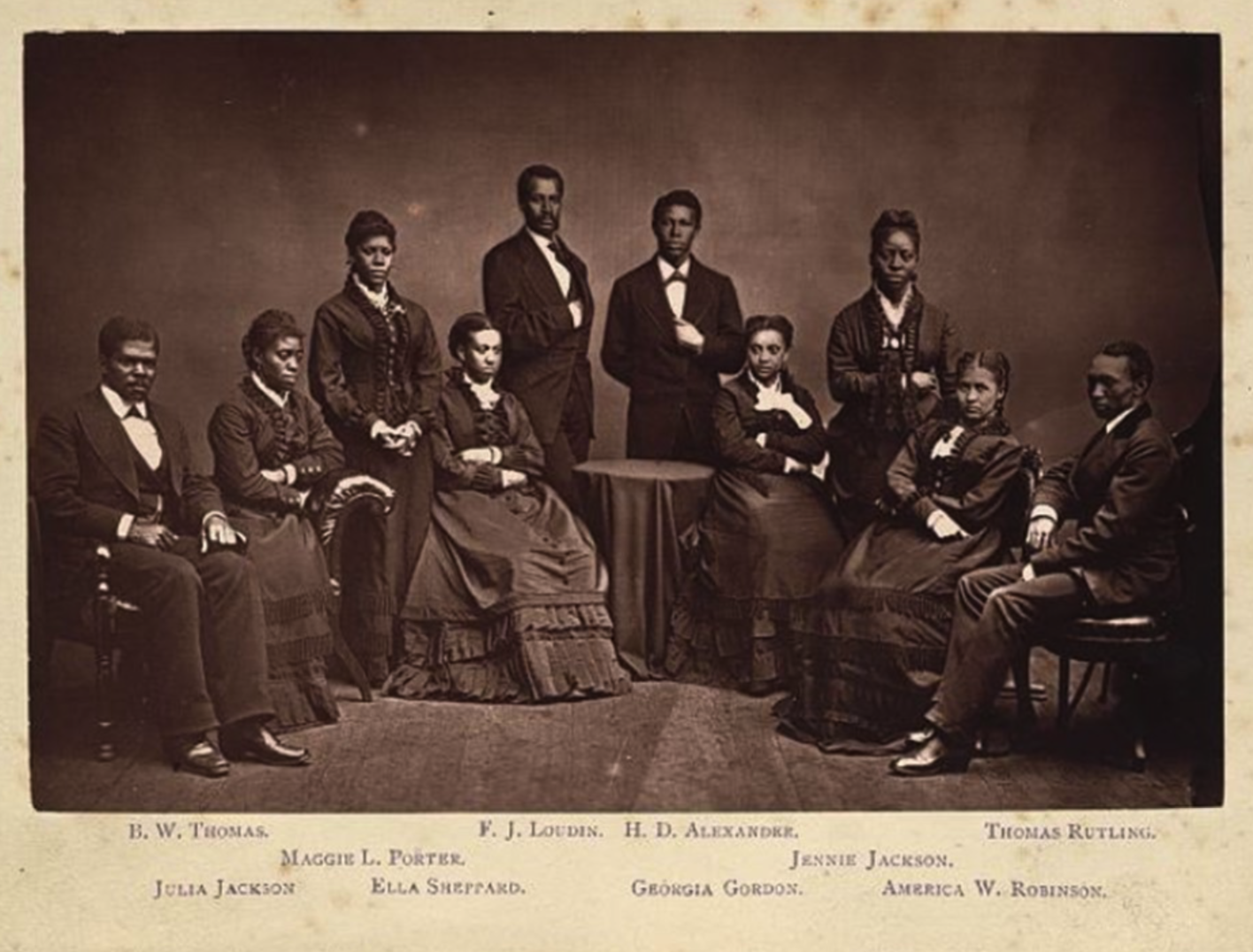 Georgia Gordon at age 20 with the original Jubilee Fisk Singers in 1875. From the National Portrait Gallery, Smithsonian Institution.

Taylor married Georgia Gordon Taylor in 1890 in Tennessee. Together they only had one child, Preston Gordon Taylor, who tragically passed away before his first birthday. While Preston Taylor found much success in his life, the success of his wife certainly did not fall far behind his own. Gordon Taylor was the leader of the original Jubilee Fisk Singers, who were renowned worldwide. She was regarded for the rare quality of her soprano voice. Gordon Taylor and the Jubilee Fisk Singers had been one of the first ever musical groups to tour America and Europe. They performed for U.S. President Ulysses S. Grant and when they toured the British Isles, they performed for Queen Victoria. The Jubilee Fisk Singers were able to raise enough funding during their tours to establish Jubilee Hall at Fisk University. Gordon Taylor passed away in 1913 at the age of 58, leaving being her legacy as an excellent singer, wife, and great friend to her husband. 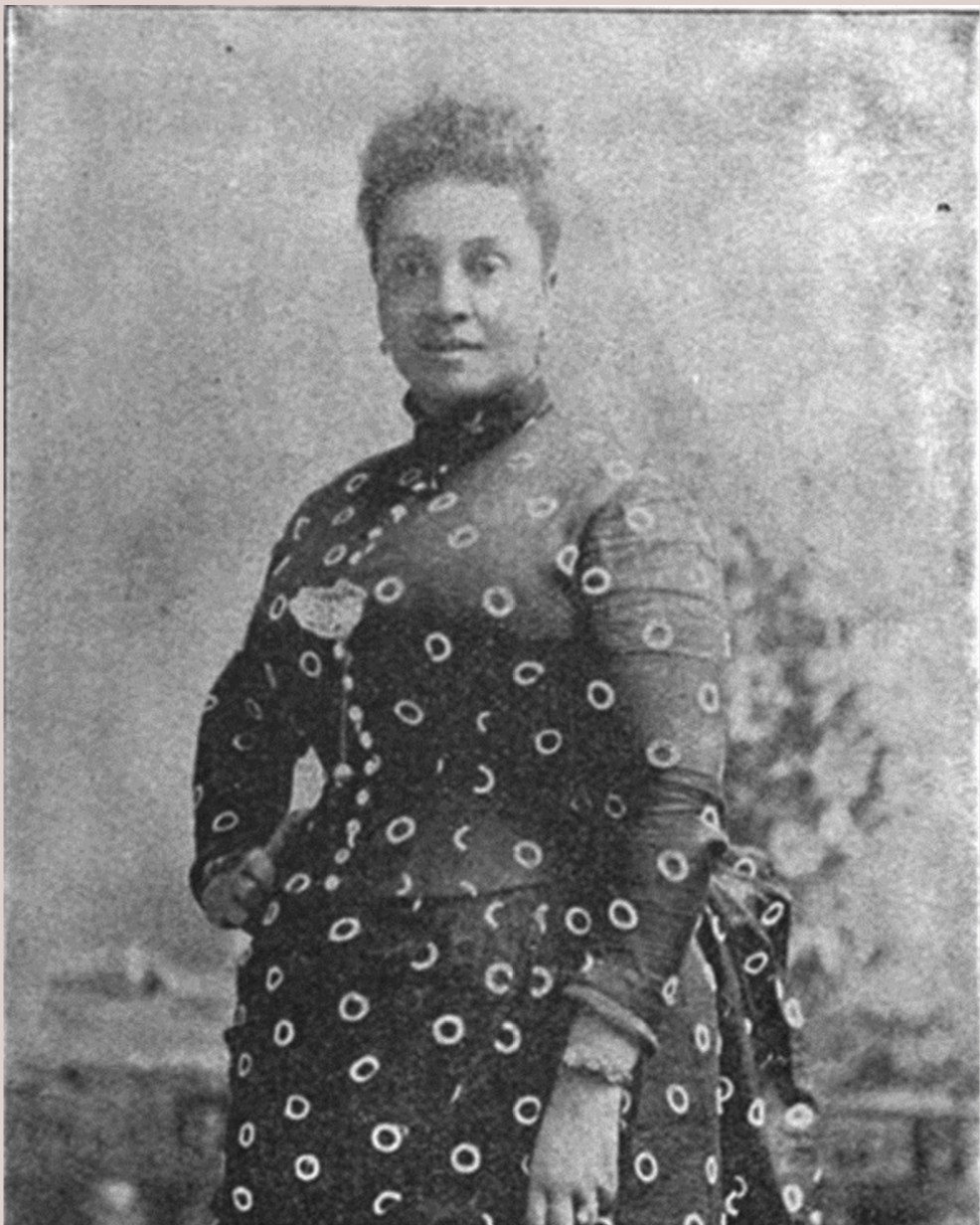 Georgia Gordon Taylor, age 42 in 1897. From Sparkling Gems of Race Knowledge Worth Reading

In 1916, following the passing of his first wife, Taylor married Ida Mallory. Mallory was born in 1876, making Taylor about 27 years her senior. Her father was formally an enslaved person, and her mother was a German-American immigrant, which gave her a unique identity and perspective of a conceptual “America.” Prior to marrying Taylor, Mallory worked as schoolteacher for several years.  Mallory would remain with Taylor until he passed away on April 13, 1931, in Nashville. Following his death, Mallory would become the Funeral Director of Taylor and Co. She maintained this role and never remarried for the remained of her life. She passed in March of 1947.

Preston Taylor left behind an immense legacy, one that is most evident in his long-time home of Nashville. Today there are several buildings and organizations that bear his name. Some to note are Historic Preston Taylor Apartments, Preston Taylor Clubhouse, Preston Taylor Boys And Girls Club YMCA, and Preston Taylor Ministries. He is remembered as one of the first ever black millionaires in America, but his reach went far beyond his finances. His voice was heard for nearly half a century in church halls across the south, he was the lead entertainer for years at the annual state fair, and he served as a figure of inspiration for countless Americans. His “push” for the Colored Co-operative Publishing Company serves as a wonderful tangible example of his contributions and influence for the African American community.

Haley, James T. Sparkling Gems of Race Knowledge Worth Reading: A Compendium of Valuable Information and Wise Suggestions that Will Inspire Noble Effort at the Hands of Every Race-loving Man, Woman, and Child, J.T. Haley 6 Company, 1897, p. 75-76